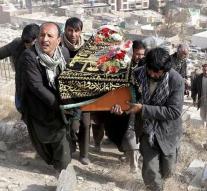 kabul - Kabul is shrouded in deep mourning after Saturday's bloody attack. 103 people were killed by an explosion and another 235 injured. This makes it the heaviest attack in the Afghan capital in nine months.

At the attack, it was now clear that not one but two fake ambulances were used. A car was blown up by a suicide bomber when it was stopped at a checkpoint. The attack took place in one of the most secure districts.

The authorities warn that further attacks may be imminent. The attack has been claimed by the Taliban. 'If US President Donald Trump continues his aggressive policy and lets the course of his weapon speak, then he should not expect Afghans to grow flowers in response. '