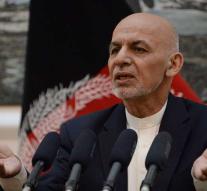 kabul - The Afghan government has issued a file with the rebellious Taliban. President Ashraf Ghani said that the file will commence on Monday and that this has been decided in connection with the Islamic sacrificial feast this week.

Ghani said the Afghan government will keep the file as long as it is respected by the Taliban. It is not clear whether the insurgents will also temporarily put down their weapons. The Taliban, however, stated in a statement that they were going to let hundreds of prisoners go.

The last week in the eastern city of Ghazni heavy fighting between Taliban fighters on the one hand and police and army on the other. There were at least 150 deaths among the Afghan security forces. More than ninety citizens also died. The Taliban have also suffered great losses, but it is unknown how many fighters have been killed by the war in Ghazni.