Home / World / Kabila does not participate in the election of Congo 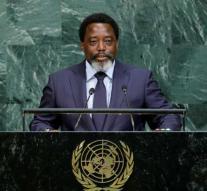 kinshasa - The Congolese president Joseph Kabila does not stand for re-election. The controversial former Minister of the Interior Emmanuel Ramazani Shadary is taking part in the upcoming presidential election on behalf of the government coalition, said a government spokesman.

Kabila has been in power since 2001 and is not allowed to participate in the elections a third time under the constitution. They should actually have been organized in 2016, but that did not happen. This led to speculation about whether Kabila intended to ignore the constitution by trying to stay on longer.

Ramazani, the intended successor of Kabila, is on the European sanction list because of alleged human rights violations. Several opposition candidates also want to get hold of the presidency in December, including Jean-Pierre Bemba. The International Criminal Court (ICC) had condemned him for war crimes, but on appeal appealed earlier this year with surprising acquittal.