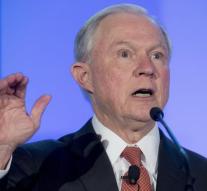 washington - The US Department of Justice has called for heavier charges and longer imprisonment for criminals. Minister Jeff Sessions (Justice) instructed federal prosecutors to put in a letter in criminal cases the most serious criminal offense that can be proved.

Sessions therefore seem to want to reverse the clock. He states in the two-page letter that 'inconsistent' policy of its predecessors is withdrawn. By deploying heavier charges, people may disappear for a long time behind the bars due to the minimum penalties for certain crimes.

Former President Barack Obama tried to lower that policy rather. His then Minister Eric Holder (Justice) advised prosecutors not always to resort to the heaviest charges, for example, if there were drug offenses that did not use violence. Crowded prisons cost the US government a lot of money.