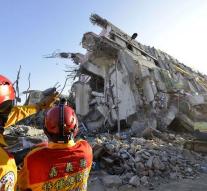 - Authorities in the Taiwanese city of Tainan started an investigation into the collapse of a building during the earthquake of Saturday. While the rescue operations at the complex were still in progress, arrived Sunday a team of four prosecutors at the crash site.

The Public Prosecutor in the city finds out if rules are violated during the construction of the flat, the Taipei Times reported Monday. The Taiwanese Ministry of the Interior has let now know that a full criminal investigation can take place only after the rescue operation.

Mayor William Lai wrote on Facebook that the city government is assisting in the investigation. Should it come to a criminal case, then the city according to Lai,, on the side of the people and protect the public interest. '

The death toll after the quake, according to the Taiwanese government now risen to 35. Almost all the bodies were found in the rubble of the 20-year-old building. There are possibly more than a hundred people buried.

More than 48 hours after the earthquake are still being rescued people. According to a witness took rescuers on Monday a woman from the rubble. Mayor Lai warned earlier that many victims are buried deep.