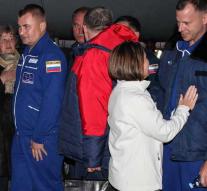 bajkonoer - Spacemen Aleksej Ovtsjinin and Nick Hague, who had to make an emergency landing on Thursday after their launch, will be able to go into space again next spring. Their flight to the international space station ISS is scheduled for next spring. The head of the Russian space agency Roskosmos, Dmitri Rogozin, said that Friday to the Interfax news agency.

The Russian cosmonaut Ovchinsin and the American astronaut Hague have since returned to the training center near Moscow.

About two minutes after take-off Thursday it went wrong for Ovtsjinin and Hague. They had to return to the ground from fifty kilometers. They landed safely and unharmed in the middle of Kazakhstan. Russia is investigating what exactly went wrong. For the time being no manned and unmanned missiles are being launched. Russia is the only one able to bring people back to the ISS and back.