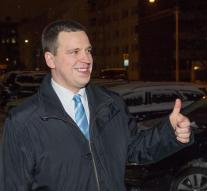 - Less than two weeks after the liberal Taavi Rõivas was ejected after a vote of no confidence, Estonia already has a new prime minister. The parliament chose Jüri Ratas Monday as government chief. The 38-year-old leader of the leftist Centre Party received support from 53 of the 93 delegates.

Ratas was vice president of the Chamber. In his opening speech he called the demographic development, the stagnant economy, growing inequality and the security situation as the biggest challenges for Estonia. The foreign and defense policy, he wants to change anything. Membership of the EU and NATO for the Baltic state is the best guarantee for security.

Ratas, on Sunday by President Kersti Kaljulaid was commissioned to form a new cabinet, will lead a coalition of three parties, beyond the Social Democrats and the conservative alliance.