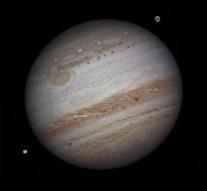 - On Io, one of the 67 moons of Jupiter, something special happens. If the planet obscures the sun, the temperature plummets on the moon. Its atmosphere freezes in part. Two hours later, the eclipse is over the moon heats up and restore the atmosphere itself. Day and a half later it starts again.

American scientists have discovered. The Io atmosphere consists mainly of sulfur dioxide from volcanoes there. Every one and a half to two days is Io in the shadow of Jupiter. If that happens, the temperature drops to Io of 148 degrees below zero to minus 168 degrees. Sulphur dioxide freezes and then condenses on the surface. When the sun shines again, the ice gas again.,, The atmosphere of Io is in a constant state of collapse and recovery, '' the researchers say.

Io is the most volcanic object in the solar system. Volcanoes emit hundreds of kilometers high clouds of sulfur dioxide from. Lava flows over the surface.