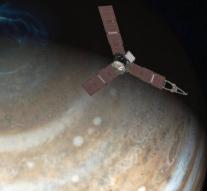 houston - The US probe Juno since his arrival in orbit around the planet Jupiter are the first pictures sent to Earth. That made the US space agency NASA said Tuesday.

On the footage you can see some of Jupiter and three of its four largest moons, namely: Io, Europa and Ganymede. In August, the probe closer to the gas giant to shoot better photos.

A NASA principal investigator is certainly satisfied that the equipment on board the probe survived the trip. He says not to wait for images of the poles of Jupiter.


The Juno was launched in 2011 and arrived last week in orbit around Jupiter, after a journey of three billion kilometers. The probe should include mapping the atmosphere of the planet. Scientists want to know how much Jupiter, for example water.