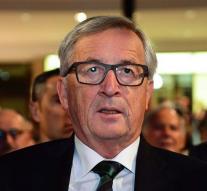 brussels - Former EU commissioners should not wait two years and a half, but in the future they can take a new job. For the former Presidents of the European Commission, the 'cooling off period' extended to three years.

That the chairman of the committee, Jean-Claude Juncker, Wednesday in a letter to the President of the European Parliament Martin Schulz. Juncker writes the current code of conduct for former commissioners stricter wanting to make 'in light of recent experiences with members of the previous committee. 'Juncker wants the' highest ethical standards 'to avoid conflicts of interest.

The code of conduct is under attack since ex-President José Manuel Barroso this summer joined the US investment bank Goldman Sachs, and it became known that former Commissioner Neelie Kroes during her term had concealed a management position at a company in the Bahamas.

In October ruled the European Commission's ethics committee Barroso had complied with the mandatory cooling-off period. Kroes is still to investigate. The Committee's opinion is not binding, but Juncker has not yet decided whether he further steps against Barroso, said his spokesman Wednesday.

Juncker also proposes Commissioners who participate in elections to the European Parliament just during the campaign to do their job. They may for their campaigns do not rely on funds and staff of the committee. Under current rules Commissioners must temporarily resign if they are candidates for the EU Parliament.