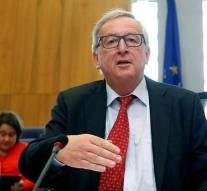 - As the country stands now, Turkey can not join the European Union. That chairman Jean-Claude Juncker of the European Commission said in an interview with German broadcaster ARD. Calls on the other hand Juncker sure to continue the talks with Ankara over membership.

,, Turkey, in the condition it is in, can not become a member of the EU. Especially when it does what some people want, namely introduce the death penalty, '' said Juncker.,, This has directly resulted in the negotiations are broken off. ''

Juncker calls it well,, not helpful '' if those negotiations are terminated by the EU. He responded thus on the Austrian Chancellor Christian Kern, next month at a summit with his fellow heads of government would propose to break off talks on Turkey's accession.