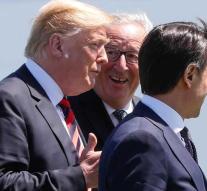 munich - European Commission President Jean-Claude Juncker appears to have received striking feedback from the US President. 'Trump said to me last week: Jean-Claude, you're a merciless' killer, 'the Luxembourger told during a visit to the regional parliament in Bavaria.

Juncker attended a meeting of the G7 last week, where Trump was also present. The commission manager suspects that the objection was intended as a compliment, but he certainly does not know that. 'It is the first time that Luxembourg has become such a threat to the United States', he remarked drily.