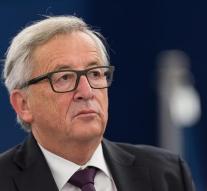 He said Saturday in an interview with the Belgian newspaper Le Soir. Juncker makes statements after his predecessor Jose Manuel Barroso came under fire over his appointment at the investment bank Goldman Sachs. Juncker himself was criticized for the way he tackled the matter.

The Luxembourg former Prime Minister now wants stricter rules for former commissioners. They would have two years after their mandate consent must ask the Commission to work in a commercial company. Now that period of eighteen months. For the President of the Commission would even that period should last three years.