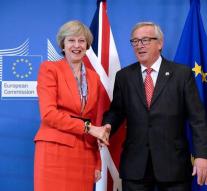 brussels - It is up to the UK to determine the starting point for the departure from the EU. That, President of the European Commission, Jean-Claude Juncker, Friday explicitly highlighted in a brief telephone conversation with British Prime Minister Theresa May, announced its spokesman.

May Juncker informed about the situation that has arisen after a British court Thursday ruled that the British government needs the approval of parliament to activate the so-called Article 50 procedure to withdraw from the EU.

The British prime minister said earlier that it would happen in late March, but because the case is presented that may not be achieved to a higher court. About postponement Juncker would not speculate, said his spokeswoman. ' The timing is a matter for the UK authorities, the Commission respects the constitutional order in the UK. ''