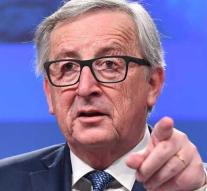 brussels - There is a 'good chance' for a compromise in the conflict between Poland and the European Commission, believes Commission President Jean-Claude Juncker. The nationalist government in Warsaw is under fire because of laws that bring the judiciary under political control. Juncker's right-hand man Frans Timmermans pulled out the heaviest instrument in December, which means that Poland could theoretically lose its voting rights in the EU.

Juncker and Timmermans have recently spoken extensively with Polish Prime Minister Mateusz Morawiecki. 'I think there is a good chance that the Polish position will shift to us, and we will move towards the Polish,' says Juncker. 'We have a permanent dialogue. '

In activating the relevant Article 7 of the EU treaty in December, Poland was given three months to reverse the controversial reforms in the justice sector. If that does not happen, Member States will have to give an opinion on the matter.