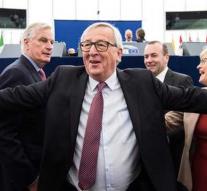 brussels - Jean-Claude Juncker canceled his visit to the World Economic Forum in Davos due to stomach flu. The President of the European Commission would give a speech on Thursday at international conference for political leaders, entrepreneurs and organizations, but stays home sick, let his spokesman know.

The Luxembourg former prime minister also failed on Wednesday at the weekly meeting of EU Commissioners. Insiders said earlier that Juncker's presence at the Swiss event should signal that Europe is back in the global top economically. He last visited the ski resort more than twenty years ago, then as prime minister.

Eight EU Commissioners make their appearance in Davos, as do many heads of state and government leaders, including Mark Rutte and President Donald Trump.