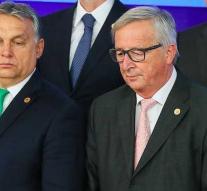 The government of Orbán, who wants to transform his country into an 'illiberal democracy' has been under fire in Brussels for some time now. A large majority of the European Parliament voted in September to activate the toughest criminal proceedings against Hungary. The parliament believes that the developments in the former Eastern Bloc threaten the European values.

Juncker also judges severely about the Hungarian leader. 'Mr. Orbán has no place in the EPP', says the former Prime Minister of Luxembourg, who is himself a Christian Democrat. Orbán's statements are contrary to the Christian democratic values ​​of the 'EPP family' according to Juncker, to which the Fidesz party of the Hungarian leader is affiliated.