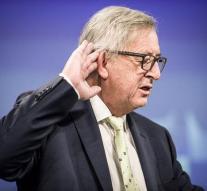 - President of the European Commission Jean-Claude Juncker does not make sense to wait for the departure of David Cameron in October to begin negotiating the departure of Britain from the union. The British prime minister said Friday he is resigning in October, after his Conservative Party appoints a successor.

,, The British have yesterday decided to leave the European Union, then it does not expect any sense until October to talk about it, 'Juncker said in an interview with the German television channel ARD.,, I would like to start immediately' said the EC president.

The European Union will act reasonably under the Luxembourg politician during the upcoming negotiations on the parting of the parties.,, It's not a divorce amicably, but it was not a real loving relationship. '