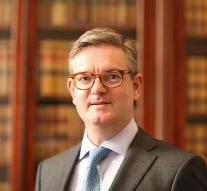 brussels - Sir Julian King may be EU Commissioner, will be targeted prospective boss, Jean-Claude Juncker. End of this month, the president of the European Commission, the EU's executive board, will decide which portfolio replaces Jonathan Hill.

A spokesperson of the commission Monday after the 'interview' the Briton said. King, now ambassador to France, was nominated by Prime Minister David Cameron as Hill has resigned after the referendum on the British departure from the EU. His duties were transferred to the Latvian Commissioner Valdis Dombrovskis.

King is a very experienced diplomat and has Brussels as his pocket. He worked early this century all the European Commission under the British trade commissioner Peter Mandelson.


The appointment of King must be approved by the European Parliament.