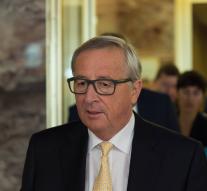 brussels - 'The cowards who committed these attacks will not undermine our resilience, compassion or our democracies.' This is what Jean-Claude Juncker, European Commission president, said in a statement following the London attacks. He sent the British Prime Minister Theresa May a letter with the same message.

Juncker followed the developments on Saturday night 'with dismay', he writes. 'I know that the residents of London will nevertheless continue, just as the residents of Manchester showed us so recently. '

The EU, its Member States and its allies around the world are solidarity, according to the head of the European Union's day-to-day governance. 'Together we will establish the values ​​that make our society peaceful, democratic, open and tolerant \u0026 nbsp; Keep. '

The victims and their family are in my mind, Juncker ends.

EU President Donald Tusk, who represents EU governments in Brussels, also mentions the events 'a new freak attack. '' Europe is participating in the fight against terrorism in the United Kingdom. '