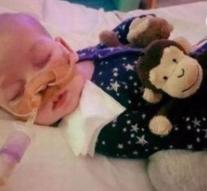 london - A British judge gave the parents of the deadly baby Charlie Gard a couple of days the time to come up with new evidence that their son would benefit from an experimental treatment in the United States. The judge handles the case on Thursday, but may not make a decision immediately.

So far, the courts have ruled that a trip to the US would only prolong the suffering of the eleven month old boy without a real chance of improvement. Judge Nicholas Francis, who also handled the case in April, said he would like to change his mind, but that he should have evidence 'of something very different. '

Charlie has a rare genetic disorder and can not move, hear, cry and swallow. His doctors find further treatment meaningless and supported the European Court of Human Rights for their position. US President Donald Trump and Pope Franciscus have offered the parents help. Mother Connie Yates said Monday that seven specialists from around the world see 'up to 10 percent chance' on a treatment that has an effect.