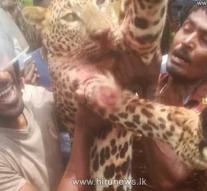 colombo - A judge in Sri Lanka has ordered the arrest of villagers who have bludgeoned a leopard. The predator, which is a protected species in the country, had recently escaped government officials who wanted to bring the animal to safety.

On TV images you can see that inhabitants of a hamlet in the northern district of Kilinochchi, former war zone, hunt for the leopard. He had anticipated it on their cattle and would certainly injure ten people, including a conservationist.

'After having heard the facts of the police, the judge ordered the authorities to investigate and to arrest the responsible persons,' said a spokesman on Friday. The Sri Lankan leopard is a subspecies that in 1956 was described for the first time by a zoologist on the island, then still called Ceylon.

Note: these images can be experienced as shocking.