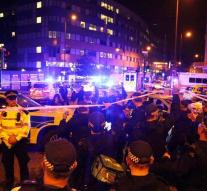 london - The man who arrived in London on Monday with a delivery bus on Muslims shouted, according to eyewitnesses, 'I'm going to kill all Muslims.' British media also reported that eyewitnesses called him calling after people were called in. 'I've delivered my share.'

It's a 48-year-old Caucasian man arrested by the police. He is looking at his mental state, transferred to a hospital. The authorities assume a terrorist motive. At this attack in the Finsbury Park district, one died and ten people were injured.

The perpetrator threatened to be matched by a predecessor of the affected mosque, Toufik Kacimi, but an imam in the vicinity, Mohammed Mahmoud, preceded the lynch party.

The mosque has stated in a statement that the community has been working for decades for peace and tolerance at Finsbury Park. 'We condemn every act of hatred and this attempt to tear off our great community. '