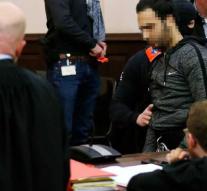 brussels - The court in Brussels pronounces Monday in the trial against terror suspect Salah Abdeslam about a shooting in the Brussels municipality of Vorst in March 2016. Abdeslam (28) is the only surviving terrorist of the Paris attacks, killing 130 people in November 2015. His bomb belt would not have gone off. The Frenchman, who grew up in Brussels, fled to Belgium and went into hiding.

On 15 March 2016, a Belgian-French police team wanted to search a house in the Driesstraat in Vorst, when the police officers were unexpectedly shot at. A sniper then shot the Algerian terrorist Mohamed Belkaïd dead. The house also turned out to be Abdeslam, but he escaped, together with the Tunisian Sofien Ayari.

The pair were arrested three days later in Molenbeek. Four days later, on 22 March, the fatal attacks took place in Brussels. Justice does not exclude that Abdeslam was in the same network. It was delivered to France in April 2016. No date is yet known for the French lawsuit.

The Public Prosecutor demands for both twenty years in prison for attempted murder and possession of weapons in a terrorist context. The session starts at 8.45 am. According to the federal prosecutor, Abdeslam and Ayari, themselves are 'most likely' not present.