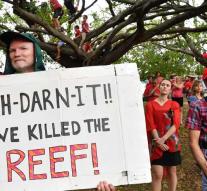 sydney - An Australian judge rejected the objections of indigenous peoples against the development of the controversial Carmichael coal mine. With the removal of one of the last legal bumps, the road is now open to the Indian conglomerate Adani Enterprises.

For the financing of the first phase of the project, this still needs to be over 2.5 billion euros. By this court ruling, the company expects to finally be able to lease the required land. The production of the huge mine in the remote Galilee basin in Queensland has been blocked for years by various procedures.

Opponents fear serious environmental damage, including groundwater and the Great Barrier Reef, and denounce the irresponsible contribution to global warming. Adani, which bought the rights in 2010, hopes to be able to ship the first mined coal in March 2020 and promises to cooperate with the indigenous population in the area.