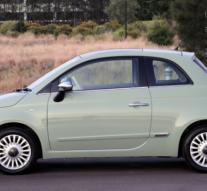 - A 30-year-old Belgian with a license suspension for justice 'saved' by his obesity. The court in Liege do not believe that the man is part of the Fiat 500 in which the police would have seen him ride.

For medical reasons was given to the obese thirties recently imposed a driving ban. During an inspection last summer runners hit the rotating Fiat 500 for his house. The doors were still open and the backrest of the driver's seat was turned all the way back.

The man denied that he was behind the wheel and told officers that had driven his wife. The cops believed and did not work the case. The hefty Belgian was initially convicted, but he was acquitted Tuesday in appeal.

The court considers that the man 'because of its size and the fact that he suffers from obesity possible behind the wheel of a little Fiat 500 could find,' the Belgian newspaper Het Laatste Nieuws.