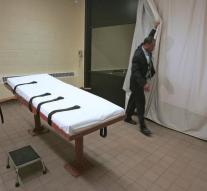 washington - The execution of the condemned Kenneth Williams on Friday was so laborious that a federal court ordered an autopsy. According to eyewitnesses, he coughed and moaned after he was anesthetized with the midazolam sleeper.

The judge wants to know if Williams was aware when a lethal injection was given shortly thereafter. If that were the case, Williams may have suffered a lot of pain.

Witnesses contradict the extent to which Williams moved and moaned.