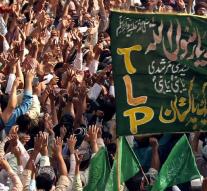 islamabad - Pakistani politicians have responded with delight to the blowing off of the Geert Wilders cartoon contest. Minister Fawad Chaudhry (Information) spoke of a 'great victory' for his government and the Pakistani people.

The Islamic TLP party also crowned victory. 'This is our victory. This is a big day for the entire Islamic world, 'said a senior party official. TLP organized a protest march to capital Islamabad out of dissatisfaction with the action of Wilders. Thousands of Muslims participated.

Minister Shah Mahmood Qureshi (Foreign Affairs) spoke according to television channel Geo TV about 'a great moral victory' for the worldwide Islamic community. He stated that the Pakistani ambassador in the Netherlands has confirmed that the competition will not take place.