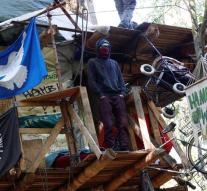 kerpen - A journalist has descended from a great height into the German 'brown coal forest' at Hambach. The victim, according to the first reports, fell through a suspension bridge between two tree houses, says a police spokesman. The man was seriously injured.

The German police started last Thursday with a big campaign to clear the forest.

There environmental activists oppose plans to win brown coal. They have built dozens of tree houses, which are dismantled by the police. There are ancient trees in the forest. t just