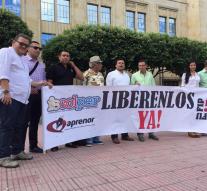 cucuta - Colombian journalists today have fired the Dutch abducted colleagues Derk Bolt and Eugenio Follender. In the central square of the city of Cucuta near the rebel area, they protested for their release. 'My brother was one of the first kidnapped by the ELN'.

'Libérenlos ya!' Or 'Leave them free', scanned some dozens of reporters from local and national newspapers and television stations. Most of them themselves have become accustomed to the violence against the media in northeastern Colombia by harm and shame.

'We want to show that we are unity and that we demand that these two Dutch people be at liberty as quickly as possible', says Christian Herrera of the local newspaper La Opinion. According to him, this is needed as a signal to the government and the army, so that they actually give the rebels the opportunity to let the two quietly leave.

Herrera has had two bodyguards in Cucuta for several years because he would write too much about local maffiosi. 'I suddenly got the message that I had to leave the city within 24 hours. But I've stayed. I live where I have to do my job. '

Colombian journalists are very impressed by Bolt and Follender's fate. It's not the first time that journalists have been taken by rebels. In addition, drug gangs and criminal organizations in Cucuta and the jungle are actively trying to intimidate the press.

'My brother was one of the first to be kidnapped by ELN rebels,' reports reporter Giovanni Hernandez. 'They thought Yimmy was a great landowner with money, but he was a priest!'

Only ten months later his brother was released after the family paid a good amount of ransom. 'He was lost forty kilos. The conditions in the jungle are terrible. The food is not good, the climate, and often he had to walk for miles. '