Home / World / Journalist at home after release in Turkey 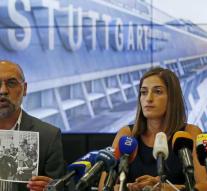 stuttgart - After months of imprisonment in Turkey, the German Mesale Tolu has returned to Germany on Sunday. At the airport in Stuttgart Tolu said she can not be really happy about her release, because in Turkey hundreds of journalists, lawyers, students and political opponents of President Recep Tayyip Erdogan are stuck.

She said she continues to work for people who are being held in Turkey for political reasons. Tolu was stuck because she was accused of supporting a leftist terrorist organization and propaganda for it. In December last year she was released from prison, but she was not allowed to leave the country until now.

A Turkish court unexpectedly lifted the travel ban of Tolu a week ago. The trial against her will continue. Tolu's husband, Suat Çorlu, who is accused of the same as Tolu, must remain in Turkey. His ban on leaving the country remains in force.

Tolu was arrested in Turkey in April 2017, where she works for the small left-wing news agency Etha.