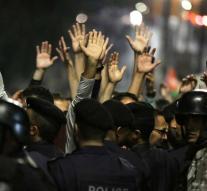 amman - In the Jordanian capital Amman, thousands of people have protested against a reform plan of the tax system on Saturday. The protests have been running for three days and are the largest in five years in the country.

The police shot with tear gas and blocked several roads in the city to keep the crowd away from the government building. People also took to the streets in other cities in Jordan. They are angry because of a tax plan supported by the IMF. Many Jordanians have seen prices rise lately, without an improvement in salary. They fear that everything will become even more expensive.

Prime Minister Hani Mulki does not want to withdraw the unpopular measure. He thinks parliament should judge about it. King Abdullah II called on all parties to make water with the wine.