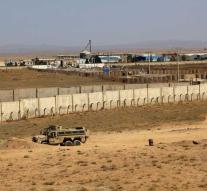 amman - The border crossing between Jordan and Syria will open again on Monday after years of being closed. This is confirmed by a Jordanian government spokeswoman and Syrian state television.

'This is a crucial route for trade between Jordan and Syria and transit to other countries,' said Jordanian government spokeswoman Jumana Ghunaimat. The decision comes a few months after thousands of Syrians who have fled to the Jordanian border have returned home and peace has returned to the region.

The last of the two border crossings between the two countries closed in 2015 on the initiative of Jordan. Two years earlier the other major transition was already closed, reports The Jordan Times.