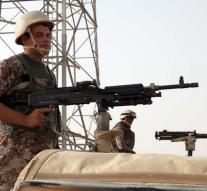 amman - The border that divides Jordan with Syria immediately closed by the military. The decision follows the suicide attack earlier Tuesday Jordanian border guards who took the lives of six border guards.

What effects the closing of the border for those refugees who want to get away from Syria, is not immediately clear. Jordan has received in recent years hundreds of thousands of refugees from Syria.