Home / World / Jordan: hundreds of White Helmets to the West 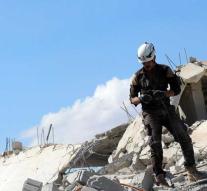 The White Helmets are medical workers who are active in besieged areas in Syria. Hundreds of those aid workers left Jordan with their families earlier this year. That way they could stay out of the hands of advancing government troops. The Syrian government and the Russians have accused the White Helmets of allowing themselves to be used for propaganda purposes.

It is unclear to which Western countries the aid workers have now left. The Dutch Ministry of Justice and Security confirmed at the beginning of this month that a 'limited number with their immediate family' in the Netherlands will be taken care of. Canada, Germany and Great Britain would also have been willing to accept White Helmets.