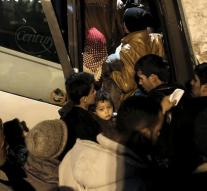 - The population of Jordan has reached its boiling point by the reception of hundreds of thousands of Syrian refugees. That Jordan's King Abdullah Tuesday told the BBC.

According to Abdullah, the influx of Syrian refugees draws heavily on social services in Jordan.,, Sooner or later it will burst the dam, I think , said the prince. He called on the international community to get more help on the bridge. The United Nations says that more than 7 billion euros needed for emergency relief to people in Syria and refugees in neighboring countries. In 2015, however, only 43 percent of donated needed assistance.

Of the 4.6 million Syrian refugees registered by the UN there are some 635 000 in Jordan. But those numbers tell by the Jordanian government is not the whole story. In addition to the registered refugees would stay a million Syrians in Jordan. Among them are people who even before the Syrian civil war broke out in 2011 fled their homeland.