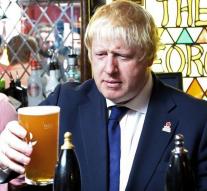 london - introduce tough campaign four months Wednesday comes to an end for the Brexit activists. For one last time the supporters and opponents had their say in order to attract voters over.

Boris Johnson, the figurehead of the 'Leave-camp, Wednesday raised the glass at a meeting in Pierce Bridge in the northeast of England. The prominent former mayor of London hopes to choose the 46 million voters Thursday for a departure from the European Union. In one of his last statements of the day, Johnson said that leaving the EU would prove that the Brits believe in their own country.

Prime Minister David Cameron appeared along with former Prime Minister Sir John Major at a Campange meetings in Bristol and Birmingham. 'You can not jump out of a plane and then back through the window of the cockpit,' Cameron spoke in metaphors about the choice that is before the British Thursday. The 'Remain camp fears the economic damage of a Brexit.

The latest polls show a very small majority for a departure from the EU.