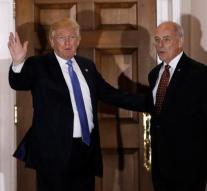 The 66-year-old Kelly was among others from 2008 to 2009, the commander of allied forces in Iraq. Navy General waved off in January this year after a career of forty years in the military. In his last position he was responsible for all US military activities in Central and South America, the so-called United States Southern Command.