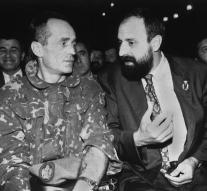 - Goran Hadžić, accused in a trial of the ICTY, is deceased Tuesday at the age of 57 years. That the BBC reports. With him was earlier detected a brain tumor.,, After a severe illness Hadžić deceased today '', the local hospital reported in Novi Sad.

Hadžić has been president of the so-called Serbian Republic Krajina (RSK). That was the area that the ethnic Serbs claimed for themselves in Croatia, after the republic had separated in 1991 from Yugoslavia.

Hadžić was arrested in Serbia on July 20 2011 as the last fugitive from the tribunal. He was inter alia charged with murder, torture, deportations and destruction of villages. The process was halted because of his illness.