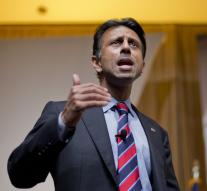 - The governor of Louisiana, Bobby Jindal, is no longer in the race for the US presidency. According to the Republican, " it is not yet time ". Jindal made ​​his decision in an interview with the TV channel Fox News.

He said that despite the unpredictable election period clearly had little interest in him. In a recent poll by market research firm Ipsos and Reuters he got a score of only 0.8 percent. Twitter Jindal said that " it was a great honor to compete for the presidency along. "

Jindal is the third Republican who withdraws from the presidential race. Previously found Rick Perry and Scott Walker gave.