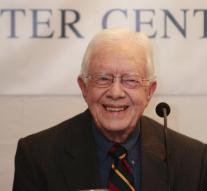 - The 91- year-old former president of the United States Jimmy Carter is free of cancer. He said this himself in an announcement on Sunday in Plains, Georgia, where he gave a lesson, US media reported.

" He said this week he had undergone a scan and that the cancer was gone ", said Jill Stuckey, a friend and fellow churchgoer. " The church, everyone here, burst into applause. " When Carter earlier this year identified a melanoma and he has subsequently undergone multiple radiation treatments. Last month, doctors said that the former president is responding well to the treatment and that the cancer had not worsened.

Speaking about his illness in August, Carter seemed resigned to his fate. " It is now in the hands of God ", he said. " And I am prepared for anything that comes. "