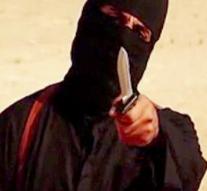 - The United States has conducted an airstrike in Syria focused on IS- combatant Emwazi Mohammed, better known as " Jihadi John. An unnamed US official that has announced to Reuters. Emwazi or has been injured in the attack and killed is unclear.

The attack was carried out in the vicinity of the city Raqqa, one of the strongholds of Islamic state in Syria.

Emwazi is known as the executioner of IS. He was featured in several beheading videos of the terror group. He was recognized in February by his mother in a video where you can see that he beheaded the American James Foley.