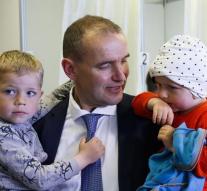 - Although not all the votes have been counted, the historian and presidential candidate of Iceland Gudni Jóhannesson claims the victory. After the counting of about a third of the vote he goes with 37.8 percent in the lead.

are called upon to elect a new head of state around the 245 000 Icelanders. After the revelations in the Panama Papers about tax evasions through letterbox firms in other countries, voters have little confidence in the political leaders of their country. It is therefore not surprising that Gudni Jóhannesson, an outsider, even went over the lead in the polls in recent weeks.