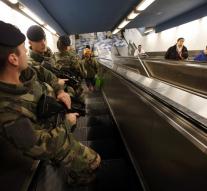 - A Jewish teacher in the French Marseille stabbed by three men who claim to be followers of Islamic State. That justice has announced in the port city in the south of France Wednesday.

The teacher is not in danger, according to justice.

Earlier in the day, at the exit of a metro station in the center of the city a young, veiled Muslim woman attacked by a man of about twenty. He proclaimed that the woman,null, a terrorist '' was and gave her a blow. Probably he also treated her with a small knife. The woman was lightly wounded.