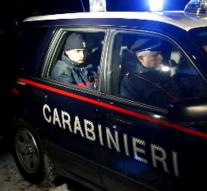 rome - A 40-year-old Orthodox Jew, from Israel, is Thursday night in Milan stabbed nine times. There would have been three attackers.

Somebody would in Italian, "I 'll kill you ! " Have been called. May be resident in Italy Arabs. There was also a woman have been at.

The attack took place near a kosher restaurant. The perpetrators fled.

The victim, who was alone and was dressed as an orthodox Jew, is directly treated in hospital. There were stab wounds on his face, including a slice of seven centimeters. But he is not in danger. He is the son of a rabbi in Milan who is originally from Afghanistan.