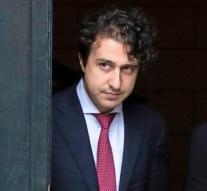 utrecht - The premiere in a cinema of the documentary about GreenLinks party leader Jesse Klaver is also not ongoing. BNNVARA decided that after Sunday it was known that the film Jesse will not be on television on Monday this week.

The reason for this was the fuss about the documentary maker, Joey Boink, who was active for the party during the campaign.

GroenLinks and Jesse's producer wanted to keep the front premiere happy. But for that, BNNVARA's permission was needed, and it did not give green light. The broadcaster does not want the documentary to be broadcast through other channels. Broadcasting Director Gerard Timmer said earlier that, for example, the show on IDFA documentary might seem like him, but that seems to be the job.

'We do not broadcast on TV, radio, internet, in the cinema, YouTube, nowhere,' said a spokeswoman on Monday. The premiere was planned in Pathé Rembrandt in Utrecht.