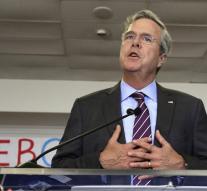 - The Republican candidate for the US presidency Jeb Bush blew Monday his campaign new life by presenting himself as a conservative with a 'can do' mentality that will fight against what he called "a new era of cynicism."

Bush launched his political comeback in Tampa, Florida with a speech that marks the beginning of a " Jeb tour can fix it." At the same time he released an e-book that reveals a more personal side of a candidate who is not easily kept standing on the public stage.

His disappointing performance in the debate of Republican presidential candidates last week in Colorado was an extra burden for someone who was once considered the favorite for the nomination of his party in the presidential election of 2016. Bush suffers now under sinking polls and a decline in fundraising.