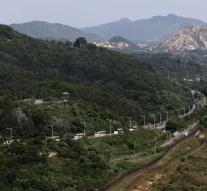 pyongyang - The North Korean authorities put a Japanese tourist out of the country. The man was arrested on suspicion of criminal offenses. The State Press Agency of North Korea reports that the Japanese is being treated leniently and may leave.

Sources around the Japanese government say that earlier this month a Japanese who was filming at military installations in the coastal town of Namp'o, reports the Japanese broadcaster NHK. It is probably the same person.

North Korea has previously secured foreign visitors, sometimes with dramatic consequences. This is how the American Otto Warmbier died after having been imprisoned for about a year and a half in the Stalinist-controlled country. The authorities had sent him back to the United States in bad health.

It is unclear whether the Japanese has already left the country. Japan and North Korea have a tense relationship. Tokyo wants among other things that the regime in Pyongyang send back Japanese who were kidnapped in the seventies and eighties.