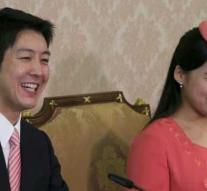 tokio - Friday was a particularly emotional day for the Japanese princess Ayako. Prior to her marriage on Monday she had to say goodbye to the imperial family. After her yes, she officially no longer participates in this, as is determined in the post-war rules concerning the emperor's house. After Monday Princess Ayahko \u0026 # x27; Mrs. Ayako Moriya \u0026 # x27 ;.

The farewell of Princess Ayako, a niece of Emperor Akihito, consisted of two parts. On the one hand there was the physical but very formal farewell- called Choken-no Gi- to the emperor and empress where everyone appeared in gala clothing. The emperor couple sat behind tables with ritual objects and Ayako sat in a bench in front of them, while her mother princess Takamado stood in the background.