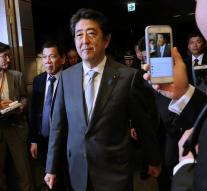 - Japanese Prime Minister Shinzo Abe is next week at the upcoming US presidential Donald Trump by to personally meet and to underline the importance of the bilateral military alliance. According to Japanese officials they have had telephone contact and confirmed the close cooperation.

Abe is at Trump in New York along on their way to the summit of the Asia-Pacific economic partnership APEC in Peru. The Japanese Ministry of Foreign Affairs assumes that Trump will need some time to put together a government. 'We want our alliance with the United States secure during this transition,' said a senior official.

Trump has his 'America First' rhetoric aroused concerns in the region. He wants Japan and South Korea to contribute more to the cost of the US military presence. There is also concern about his opposition to a Pacific trade pact.